No items found.
Go To Shop

Product is not available in this quantity.
Design research

Wayfinding in City of Busan 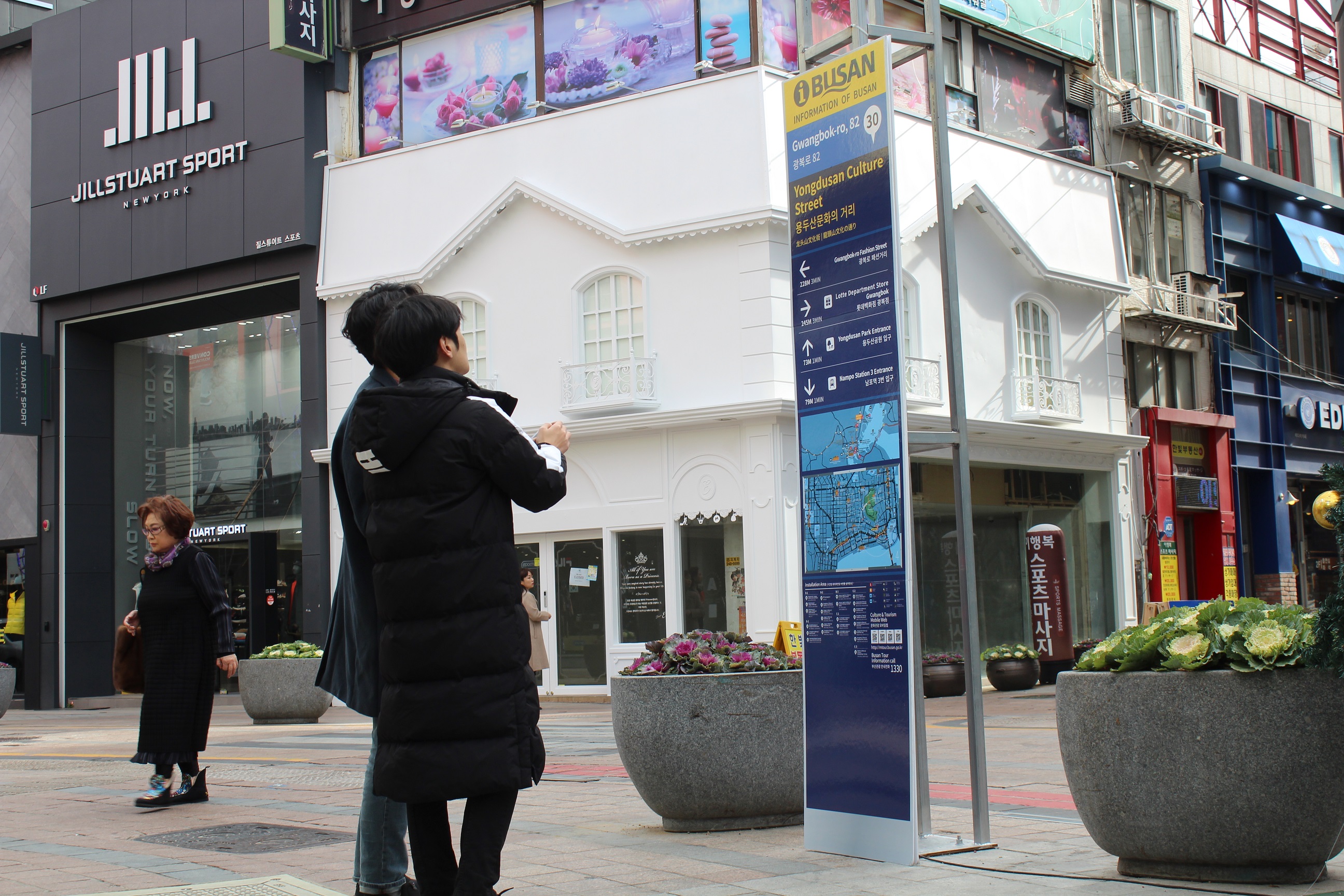 City of Busan is the second largest and most beautiful port city in South Korea which best exemplifies the attractive balance between a long, rich heritage of dynasties and a recently developed modern culture. Foreign tourists arrivals in Busan increased to about 2.5 million in 2018, whereas satisfaction with public tourism services was still low.

This project set out to develop new tourism services for foreigners visiting in Busan. For the initiative, the project was carried out under the supervision of City of Busan and Design Council Busan. They requested new legible wayfinding signage and system design using service design process. For the testbed, three districts(Seomyeon, Haeundae, and Nampo area) where many tourists visit were chosen as pilots. Therefore, the aim of the project was to establish a standardized tourist information signage design that reflects the local characteristics of City of Busan.

Our team was charged with tasks for the user research such as identifying tourist segments, discovering their needs, and creating new opportunities. Signage design for wayfinding was conducted by the visual design team.

In order to understand current problems of tourism experiences, we went out to the scene to see the relevant environment, facilities, people, and information signages. We found out that all the signages looked different and very difficult to read.

We hired 28 participants from China, Malaysia, Indonesia, and Japan who do not know much about Busan for the ethnography research. Some of them were groups or individuals to explore the way we gave them as a mission. We observed how they find their way and their unusual movement, action, and behaviours within the pilot zones.

We handed out check lists as design probes for participants to record their tourism experience for themselves. They recorded their movement, emotions, problems, and any thoughts while moving which allowed us to understand their vivid experiences. After the experiment, we had interviews for each group.

Our targets were divided into three segments depending on their level of desire about wayfinding. Among them, explorer tourists had a higher level of desire (enjoyable, meaningful) for fun experiences rather than being guided by the wayfinding signages.

Their journey was subdivided into issues according to the similarities and differences between the three types of persona. The experience journey was designed based on four perspectives: Emotion, Needs, Wants, and Stereotypes. These were then divided into the sequence from the preparation of the tour to the point of leaving in order to discover fundamental problems. 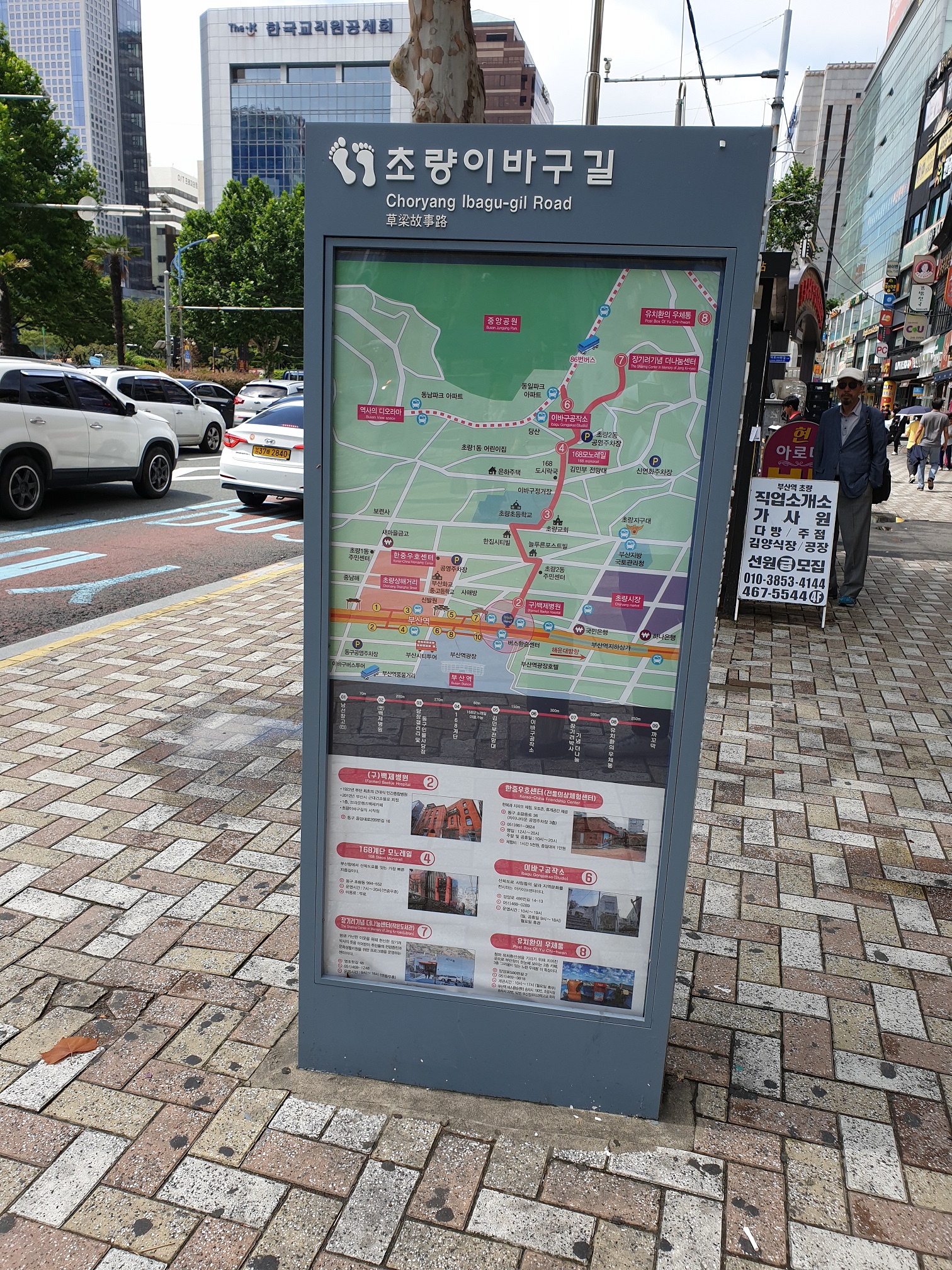 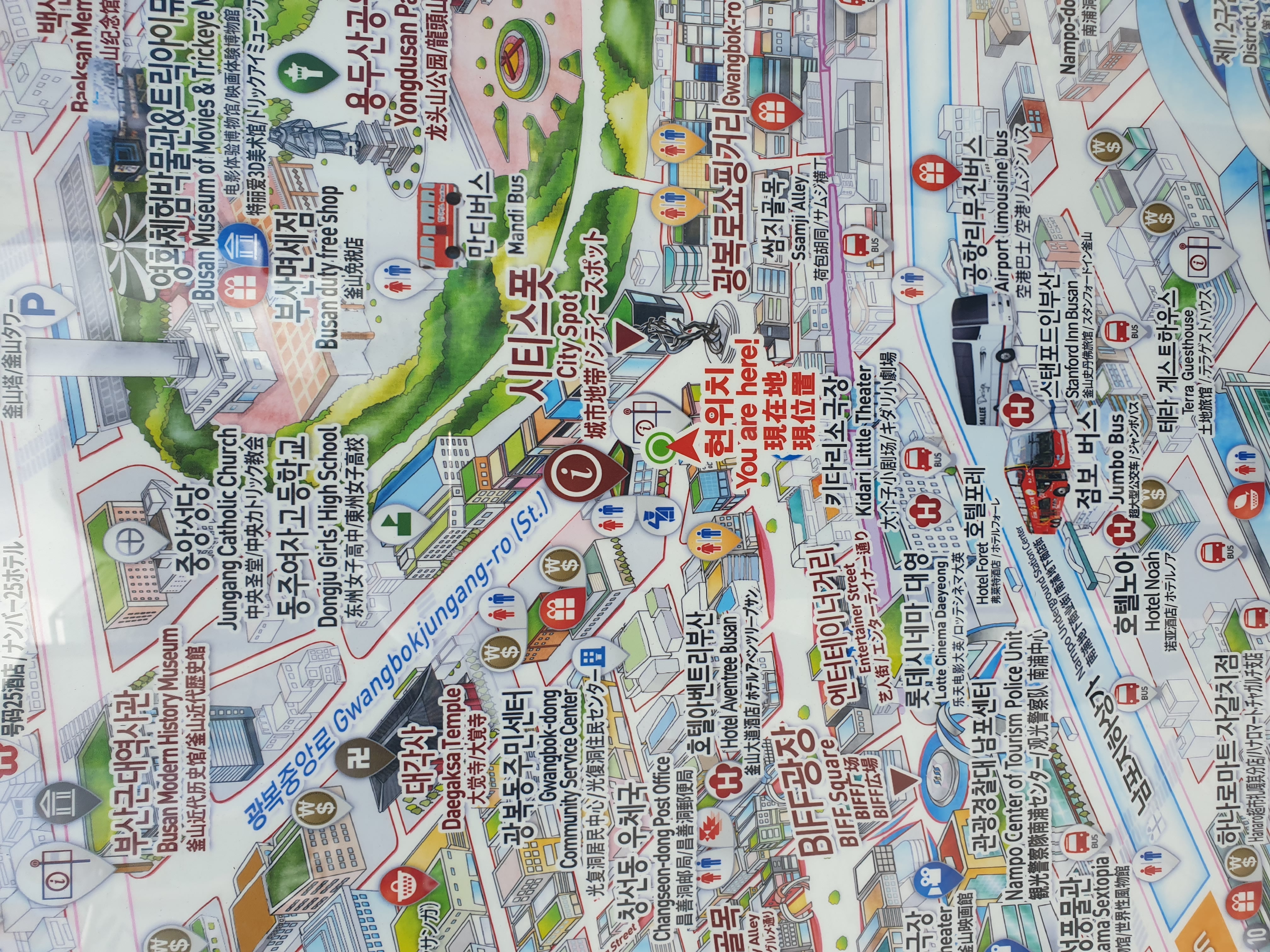 Do not know the need for treatment 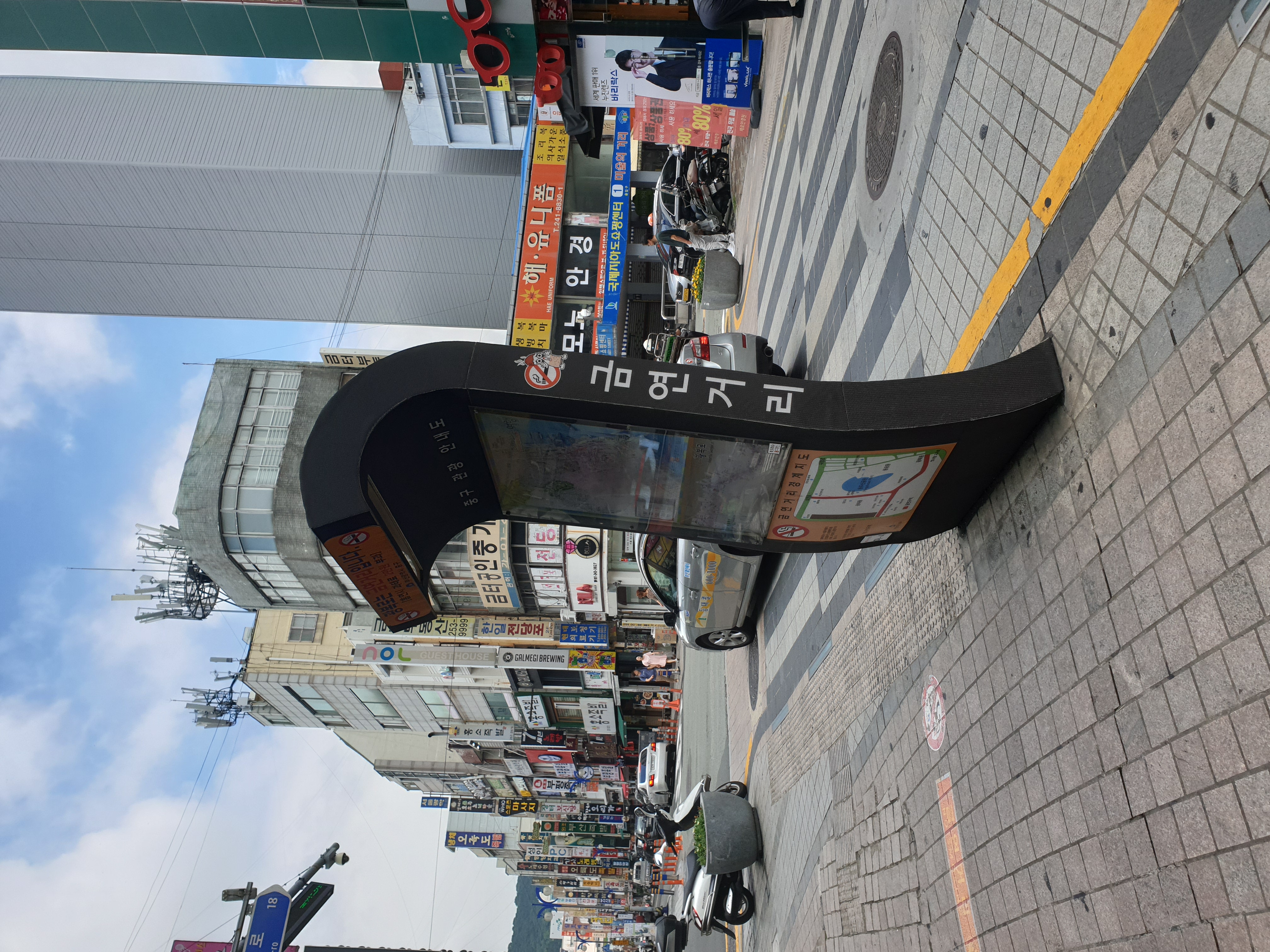 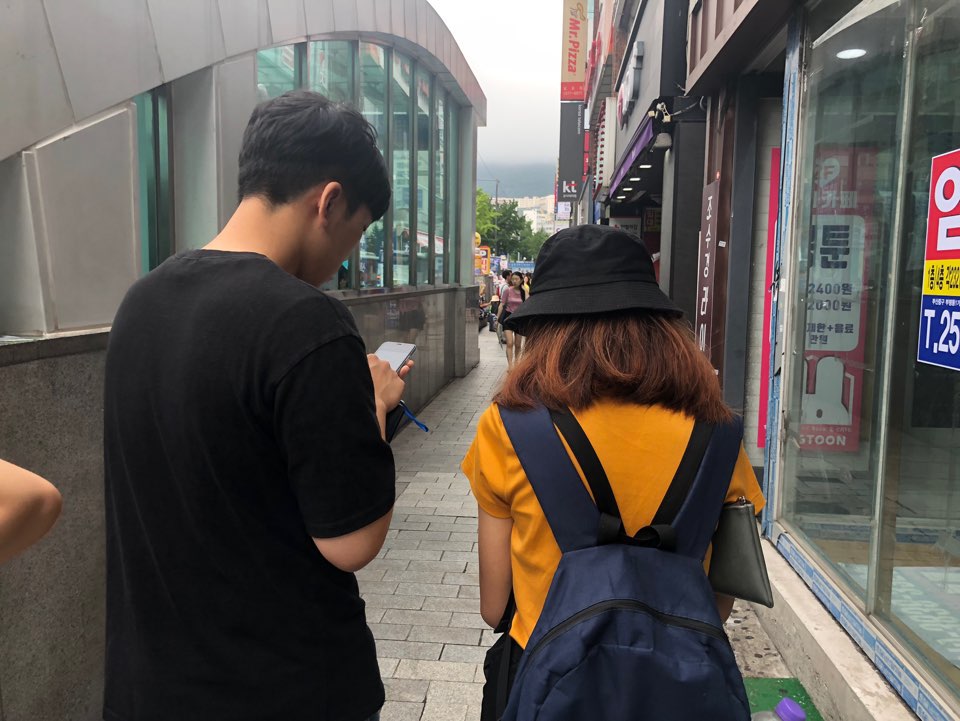 The treatment process is long and complicated

To generate novel ideas that are aligned with tourists, tourism experts, etc. participated in the co-creation workshop. The workshop was also conducted as a part of the 2019 ISIDC conference workshop held in City of Busan. In total, 28 international design students and 14 professors from 5 different countries and 10 different universities participated in the workshop from 25 to 30th 2019 for 6 days. 6 groups were formed and we delivered missions to create design ideas for the accessible wayfinding in City of Busan. The final results were presented in front of the professors at the end of the workshop and we selected several ideas for prototyping.

The visual team, cooperating with our team, carried out the prior design on the basis of ideas derived from the workshop. We regularly held a meeting with a design advisor who is an university professor to develop the design. It took a lot of time to negotiate the deisgn direction such as colour, shape, size and map because there were many aspects we needed to take into account. For example, yellow and dark blue combination was the most visible colour from a distance even for disabled people, but it lost the symbolism of City of Busan.

After the visual design team designed, our research team planed to test the design in Nampo area which is one of the pilot zones. Prototypes were printed out and attached on the formboards. Afterwards, we established specific assessment plans to verify the usability and satisfaction of the prototypes. Suitable test locations were selected as routes and prototypes were deployed. And we invited 4 foreign tourists to conduct the usability test so that results could be incorporated into the development of the designs.

The participants were assigned a task to find Kukjae Market from metro station, and they were observed trying to find their way. I, as a moderator, was induced them to think aloud and mention the reasons for their thoughts and actions. Moreover, several actions were taken to ensure a smooth assessment (e.g. no smart phones were allowed). After each task, we brought them to a place for in-depth interviews, and participants were asked questions about what happened during the usability test.

It was designed to show the symbolism of Busan and make it easy to find from afar.

Due to the budget limit, we tried to use a QR code instead of digital signage to provide additional information via mobile.

Pin numbers were assigned to the signage to apply a new system in order to make them easier to remember.

i-BUSAN : Five Types of Wayfinding Signage Based on Each Purpose

Wayfinding types were divided into five different categories according to behavioral andcognitive stages, and their forms were designed differently. 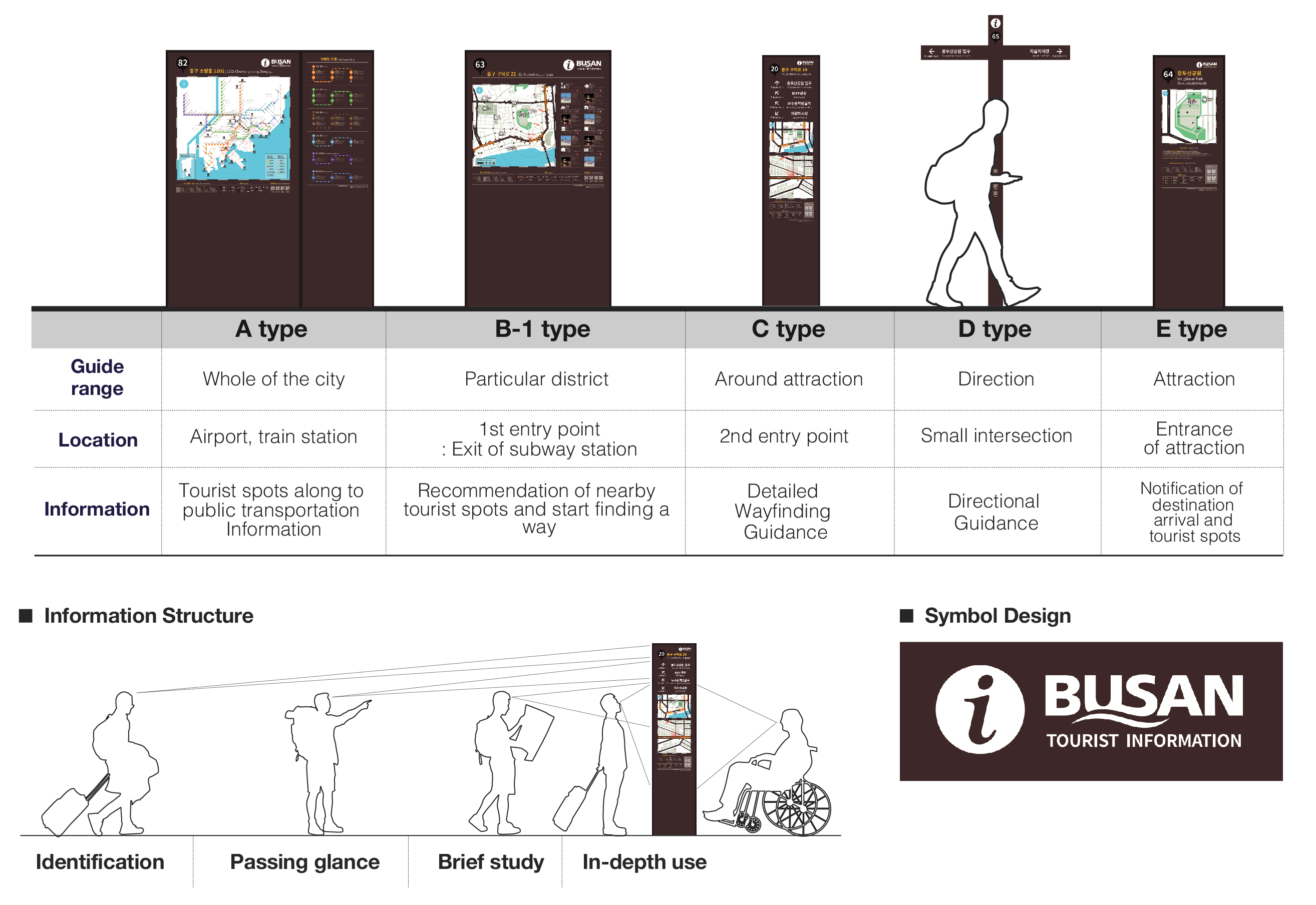 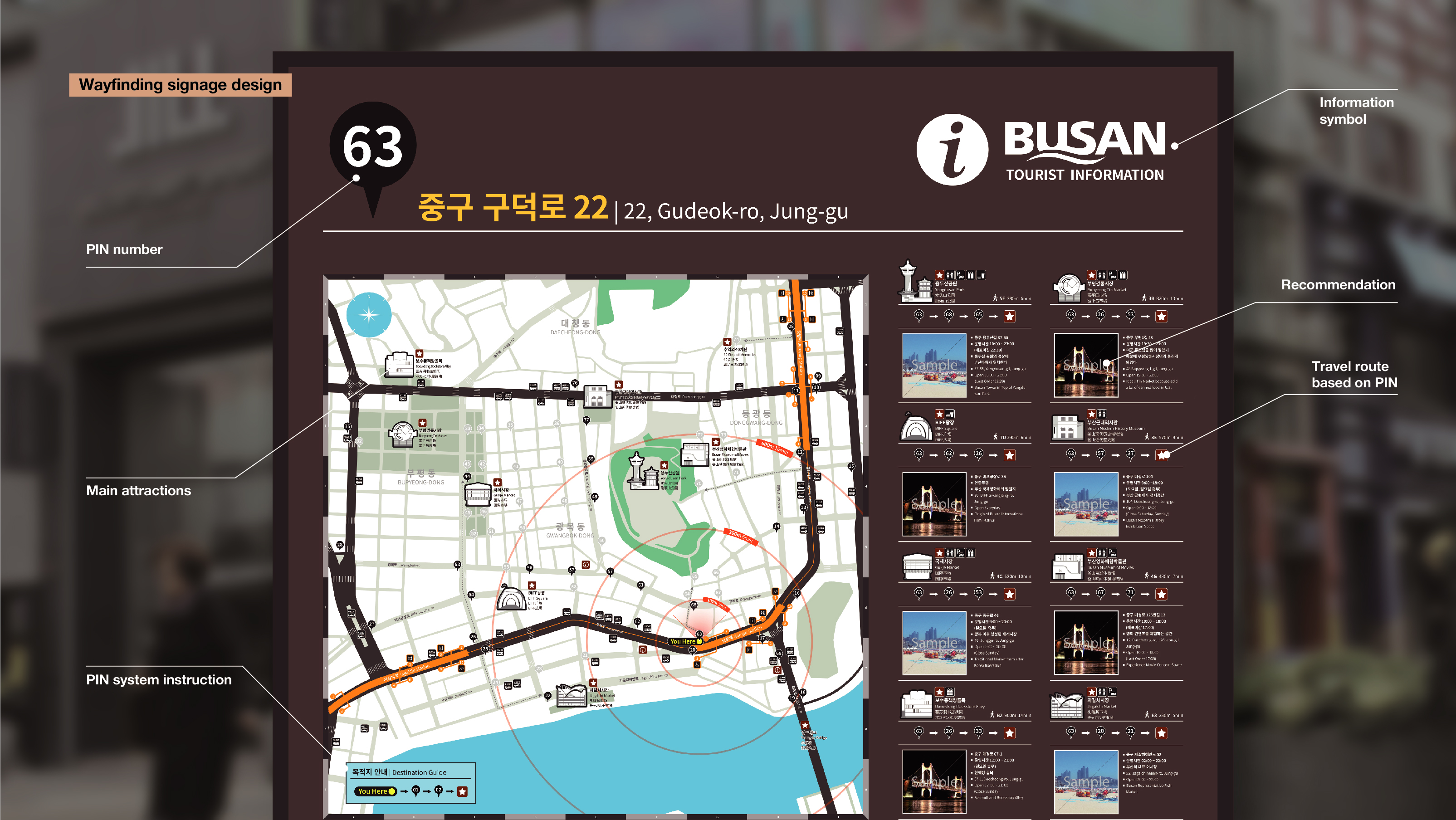